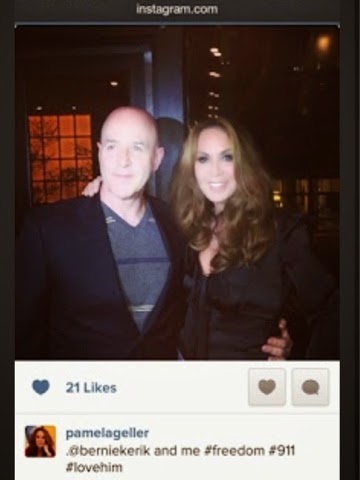 Muslim-hater Pamela Geller recently won a federal case earning her the right to post her Muslim-hating rhetoric on public buses of all places. Last year, during a reported 9/11 remembrance dinner she was photographed hanging all over married felon on probation Bernard Kerik, on Instagram, professing her “love” for him. Bernie looked as if he didn’t hate the smother!

At the same time, in his book, “from Jailer to Jailed”, felon Bernard Kerik also professes his admiration and frienship with King Abdullah II of Jordan. The last time I looked, King Abdullah was a Muslim! It has been speculated Bernie gets by with a little help from his friends (http://bit.ly/1FfJFfS)

So it begs the question: Is Bernard Kerik a hypocrite or an equal opportunity whore of the limelight? Or Both…