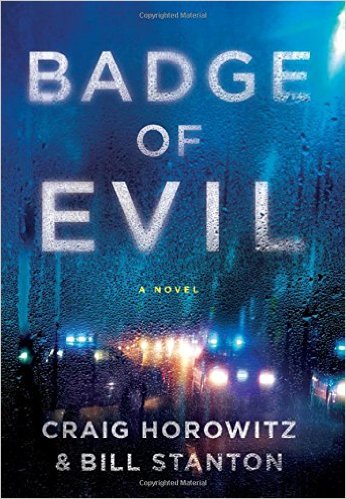 Did felon Bernard Kerik inspire the corrupt commish character in “Badge of Evil”? Of course, in my humble opinion…

I was intrigued since inmate Bernie Kerik, during one of our visits while he was incarcerated in FPC Cumberland, MD, once described Bill Stanton by saying, “..he was a cop for about five minutes so he thinks he knows everything…”. Well, now you see, I just had to go there…or here…

The mere mention in reputation of those infamous Metro NYC names tells anyone this novel is destined to be one dynamic crime thriller! I read an excerpt and now I can’t wait for the Kindle download! Even more enticing is the connection and history between the composite characters in the book and the real life formulators of “Badge of Evil”!

According to a Fox5NY media appearance on 07/27/15, the “composite” character (antagonist), Commissioner Lawrence Brock, is described as a “corrupt, out-of-control police commissioner”. An earlier New York Post Page Six article, describes the same character, Commish Brock, as “an ambitious, headline-grabbing NYPD commissioner being touted for a promotion to Homeland Security”. Well, if you have to think too hard to put that together, you could probably qualify for a job as a NYC Commissioner of Corrections at Rikers or the Interim Iraq something something! Ha! (Did I say that out-loud?!). Of course, it’s Bernie. However the book includes a nifty legal disclaimer that “any resemblance to actual persons…is coincidental”*** insert wild laughter here***

So we all know Bill Stanton from his private security to the stars and his accompanying Judith Regan in the successful mission to liberate her divorce files from the grips of a horrible divorce attorney once relieved of his duties. We know Craig Horowitz as the writer of one of the best articles describing the “storm that wrecked” Bernie Kerik’s career. And we all know Judith Regan as Bernard Kerik’s book publisher to the very successful 2001 memoir, “The Lost Son“. Oh, and yeah, there was that extra-marital double affair with Bernie cheating not only on his wife, Hala Kerik, but also with and on another long-time lover, City Corrections Officer Jeanette Pinero, culminating in a nasty breakup when Judith found out Bernie was lying to her about Jeannette and the status of his marriage. Oh, and yeah, there was those $5million reasons in that nasty Fox News law suit where truth about Bernie Kerik was on Ms. Regan’s side.

So now, some fourteen years later, the “Commish” finally gets his comeuppance in a most endearing personal yet subtle sting in the “Badge of Evil”! Touche, Ms. Regan! Well played, Ma’am…very well played…(Now you all gotta just get this book!)