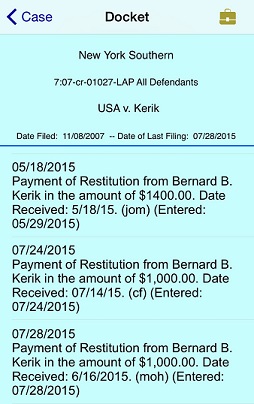 Once upon a time there was an eight-time convicted felon, on supervised release, after two years out of prison serving time for crimes involving corruption and money, owing the USA (the country to which he lied and cheated) a reported whopping criminal restitution of over $187,000! Lets call this felon Bernard Kerik.

And in Bernard Kerik’s land of hype, on the grind of illusion, this great country which he cheated, and the SDNY probation authorities allow him to “create” and participate in a dark money 501(c)(4) organization to allegedly support “criminal justice reform”. I have opined on this very blog about ACCJR.org. Hard working, tax-paying, law abiding persons like myself may think felon Bernard Kerik should get a j-o-b and pay his ENTIRE debt to society before being allowed the LUXURY of being exalted to a public position of authority on anything except being a thug. However it’s perfectly legal and Bernard Kerik doesn’t, by present law, have to divulge the sources of money he collects for ACCJR.org. This felon on probation who whines about being in a perpetual state of personal financial distress is now charged with being wined and dined by high rollers in the dirty politics similar to that which sent him to prison!

Felon Bernard Kerik’s dark money “organization” ACCJR.org has exactly 39 “friends” on Facebook. But perhaps the worth of ACCJR.org cannot be tabulated in supporters or public support, or can it? Where does ACCJR.org get its money? Better yet, where is the money “funneled”? Does any of it go toward paying felon Bernard Kerik’s outstanding $187,000 criminal restitution? Who is minding this morally-challenged eight-time convicted felon on probation as he arbitrarily travels the country with no clear purpose?

No place on ACCJR.org website does it explain it is a 501(c)(4) or if it is properly registered as such. Nowhere on this website does it declare how much money-strapped “spokesman” felon on probation Bernard Kerik receives as income for this role to be on tv, got to lunch, go to dinner, travel, glad hand politicians in Washington DC or whatever else he does with this dark money. One might think he is flirting with a risky  venture here, among other sweet, less-than-moral temptations along his travels….

So, last week we see felon Bernard Kerik all dressed up in Washington DC with his sweet FAMM Foundation (supported by Koch Industries) stumping with other crooks and cronies some crazy crap about conservative supporting “criminal justice reform” for crooks and cronies!

But wait…it gets better…then felon Bernie Kerik (who is a conservative this week), @BernardKerik, posts this boastful yet cryptic subtweet on Twitter that he is “In Los Angeles for the week”! Wow. Crime must pay! What possibly could a morally-challenged, eight-time, financially-strapped convicted felon on probation who owes $187,000 criminal restitution to the government to which he lied and cheated, be doing in California for the week? Must be nice, that felon criminal life…..Such punishment!

The fairytale may continue for, Bernard Kerik, this morally-challenged, eight-time, financially-strapped convicted felon on probation who owes $187,000 criminal restitution to the government to which he lied and cheated. Guess who else is in California this week prepping for the $$$ Koch Bros “Freedom Partners Annual Summer Conference“!

Now, I remind you this is all a sweet reverie. Perhaps, Bernard Kerik, this morally-challenged, eight-time, financially-strapped convicted felon on probation who owes $187,000 the government to which he lied and cheated, was permitted by the US Federal Probation authorities to travel to California to rest, hob-nob with Sly Stallone, work on his tan or perhaps look for a left-coast j-o-b? Naw…. It MAY be what felon Bernard Kerik does best: use O.P.M. (Other People’s Money) he hasn’t earned to be “made”, promote a fantasy agenda he only believes for a moment or until the money runs out! Have we heard this fairytale before?

But does felon Bernard Kerik live happily ever after? Stay Tuned.