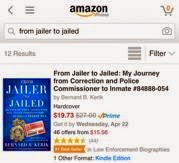 In June, 2012, Bernie Kerik wrote me a “venting” letter about the book we’d been writing with doubts about it selling as well as his first book, “The Lost Son”. Bernie was insecure about many things in prison. This letter he wanted research on author, Thomas A. Reppetto. Bernie vented he wasn’t sure anyone would buy his new book and was concerned how an unofficial NYPD historian like Tom Reppetto would treat it. (According to Len Levitt of NYPDConfidential.com, “Thomas Reppetto, the NYPD’s unofficial official historian, is perhaps the nation’s foremost police historian. A former detective commander in Chicago with a doctoral degree from Harvard University, his book, “The Blue Parade,” is perhaps the finest American police history ever written.) Bernie wanted to write on the standard and respect of Thomas Reppetto but without his literary muse, Judith Regan, (who was his mistress and publisher for “The Lost Son” contributing to its wild success), there was little hope.

Bernie Kerik’s book “From Jailer to Jailed” is not honest and not genuine. As I have said before, The America public has a great BS meter and sales of this disaster are telling. Here are the raw numbers right from its biggest distributor, Amazon.com with rankings in both Kindle and Hard Cover:

The reviews are also echoing the sentiment of readers. Check out the review by Cj Ciaramella in “The Daily Beast” entitled, “Bernie Kerik’s Criminally Boring Jail Memoir”. Mr. Ciaramella seemed to enjoy my solitary confinement chapter but not too much more. My favorite excerpt, “Kerik’s book is full of cheap platitudes, pat conclusions and bad writing. As a criminal justice reform polemic, it is a retread. As a tell-all prison memoir, it is a snooze. And as a public image fluffer, it is a bit embarrassing and heavy-handed.”

I couldn’t have said it better myself but I’ve tried!